When autocomplete results are available use up and down arrows to review and enter to select.
Back
Published Jul 15, 2020
In Unique Picks 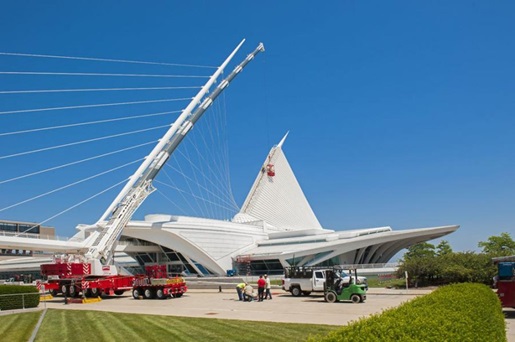 In 2001, the Milwaukee skyline changed forever with completion of the Milwaukee Art Museum’s Quadracci Pavilion. The 140,000-square-foot expansion was crowned with a unique, motion-enabled architectural detail dubbed the Burke Brise Soleil. Meant to evoke a bird’s wings or ship’s sail, the 217-foot wide structure opens and closes via hydraulic cylinders. Weighing in at 90 tons, it consists of 72 individual steel fins that vary in length from 26 feet to 105 feet. The striking structure was the first project on U.S. soil designed by internationally renowned Spanish artist and architect Santiago Calatrava.

Fast-forward almost 20 years later: the dramatic setting provided the backdrop for the Milwaukee debut of a brand new Liebherr LTM 1230-5.1 from Dawes Rigging & Crane Rental, a member of the ALL Family of Companies. Indeed, the arc of the crane’s boom looks at home in the midst of the museum’s artistic architectural elements.

When the Brise Soleil required maintenance, Dawes was contracted to provide a crane to assist with the delicate work to be performed high in the air. The crane was outfitted with a man basket and was responsible for carrying two ironworkers up to the Brise Soleil’s fins.

The ironworkers maintained constant radio contact with the Dawes’ crane operator, coordinating positioning as work progressed. The job also included using the LTM 1230 to replace one of the hydraulic cylinders used to open and close the span.

Dawes’ rental specialist Kirk Williams said the project made an excellent maiden voyage for the new LTM 1230, which Dawes took delivery of in March, not only because of its boom length, but also its wind chart. “The museum is located directly on Lake Michigan, where wind is always a factor,” said Williams. “The Liebherr LTM 1230 not only gives us the reach we needed for the job, but it easily maintains stability even in winds 18 to 20 miles per hour.”

The crane was configured with 243.2 feet of main boom at a 180-foot radius and the man basket at approximately 100 feet. Stability was aided by the deployment of full outriggers and 158,700 pounds of counterweight. The crane was on site at the museum until maintenance work was completed a little more than a week later.

When Liebherr unveiled the five-axle, 275-ton capacity LTM 1230-5.1 , it touted the machine as extremely versatile, powerful, and safe, with a surprising structural steel design. This includes outriggers that are single-stage in the front and double-stage in the rear, unlike any model that has gone before. The single-stage outriggers feature greater rigidity and are lighter, a weight reduction that can be used to extend the boom length. The extended rear supports, together with Liebherr’s VarioBase®, deliver particularly high lifting capacities.

“This is a versatile piece of equipment,” said Williams. “We expect our customers will find a lot of uses for it.” 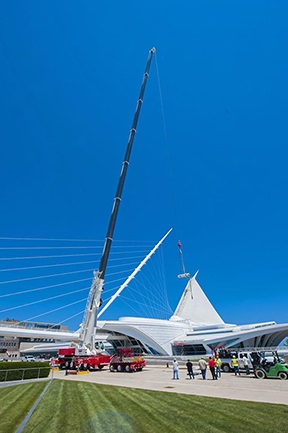