When autocomplete results are available use up and down arrows to review and enter to select.
Back
Published Apr 15, 2020
In Plants and Processing

WHERE THERE’S A WILL, THERE’S WHEY 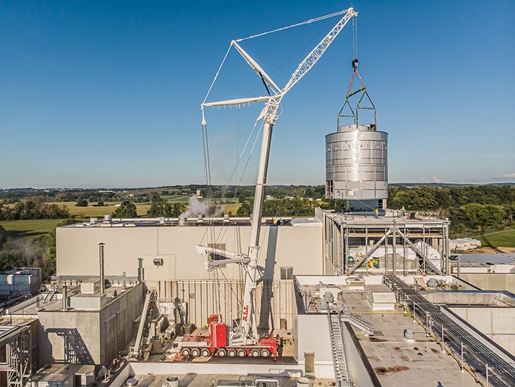 In the heart of America’s dairy country, a cheese-processing plant is in the midst of a multiyear modernization project that will increase its ability to process more milk and make larger blocks of cheese. Infrastructure improvements to the plant in Kiel, Wisconsin, include modernizing cheese-making and packaging processes, expanding plant capacity, and making whey-processing improvements.

The project involves constructing numerous new buildings. The simultaneous construction and various buildings in different states of completion posed a challenge for contractor Miron Construction. In particular, when the time came to place a new whey dryer on the roof of one of these new buildings, the surrounding area was just terribly short on usable space.

There was enough new construction near the building that a courtyard with limited space was the only area to place any crane brought in to lift the whey dryer. Within the courtyard, there was only one spot that had the necessary tail-swing clearance to position the crane. Adding to the challenge, there was an overhead ammonia line that would need to be avoided. In essence, the crane had to be placed snugly in a box and then carefully navigate around the lid.

Bill Schaller, project manager for Miron, called Scott Jerome, branch manager of Dawes Rigging & Crane Rental, a member of the ALL Family of Companies, for his recommendation on how to approach the lift.

Based on a site visit and preliminary drawings, Jerome believed the 600-USt Liebherr LTM 1500-8.1 mobile crane, with its mix of capacity, reach, and mobility—was the best tool for the job. 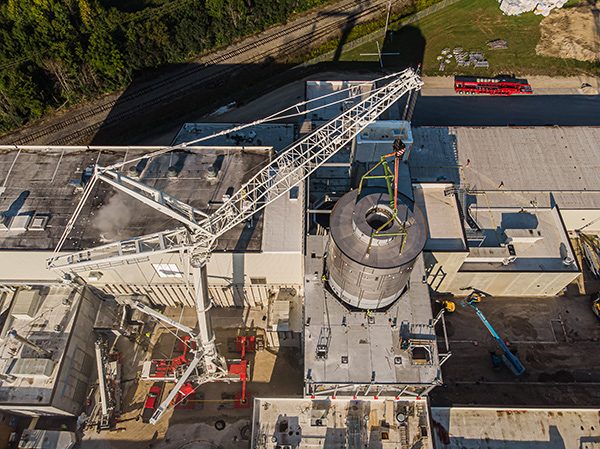 At this point, Jay Mathes, virtual construction specialist for Miron, began working closely with the Dawes engineering department to map out a 3D lift plan.

“Jay had done a 3D drawing of all the buildings already on the site,” said Jerome. “We were able to bring those into our software and add a 3D rendering of the Liebherr LTM 1500-8.1 to get a realistic idea of how the crane would interact with the site. We knew it would be tight—but we knew it could be done safely and effectively.”

Using computer technology was only the beginning. Next, the Miron and Dawes teams went to the site and physically mapped out where the crane would be positioned. This was done multiple times, making adjustments until the precise position was determined.

Then, another curveball. The team discovered that the crane’s primary weight-bearing outrigger would be positioned directly over an underground concrete sewer line. In other words, now the bottom of the “box” had a potential obstruction, too.

Dawes’ heavy lift engineer, John Stolarczyk, was brought in to come up with a solution. He determined that adding a nine-inch layer of coarse stone along with the 12-foot x 8-foot steel ground matting would distribute the weight evenly enough to allow the outrigger to safely remain above the sewer line.

Finally, after approximately two months of planning, they were ready to lift the whey dryer into its permanent position, atop a building 170 feet above ground.

The whey dryer is 45 feet high and 35 feet in diameter with a weight of 120,000 pounds. Rigging added another 30 feet, increasing the tip height even further. The crane’s jib was constructed under the overhead ammonia line, tipped on rollers, and then rolled clear and boomed up. A preliminary lift was performed to position the workpiece—the whey dryer—farther away from the crane because of the radius required by the close quarters.

To pick the whey dryer for its final placement along the processing line, the LTM 1500-8.1 was configured with 121 feet of main boom, 69 feet of luffing jib, and 383,000 pounds of counterweight.

“Where the crane had to be built and swung into position, it had to be set up with all counterweights, short luffing, and a Y-frame for extra boom support,” said Jerome. “The day we made the lift, there were less than eight inches of clearance between the Y-frame struts and the building. In 34 years, it’s the tightest job I’ve ever been involved with.”

The operator did a dry run of the lift before the rigging was attached as a final check that the site had all proper clearances. When it was time for the lift, the operator meticulously swung the boom and lowered the piece into position. The crane then held the piece for six hours while the welding crew welded it into place. It took months of planning for those few critical hours.

In the end, “The lift happened smoothly and went exactly according to plan,” said Schaller, the Miron project manager. “It was uneventful. We like uneventful.”