When autocomplete results are available use up and down arrows to review and enter to select.
Back
Published Sep 10, 2019
In Roads and Bridges

The Road Most Taken 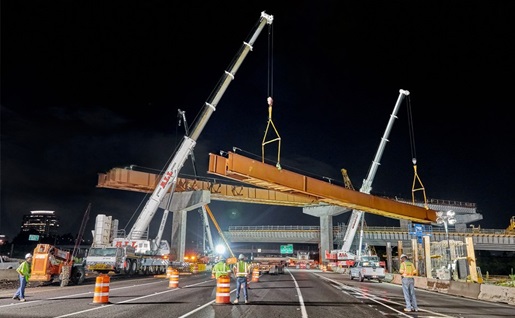 Atlanta is home to 6 million people, internationally known corporate residents like Coca-Cola, CNN, and the Home Depot … and traffic. Lots and lots of traffic. Perhaps at the epicenter is the interchange that joins State Route 400 with Interstate 285, which sees an estimated half-million cars daily. Slowdowns of almost an hour are common.

Replacing the interchange has been discussed for well over a decade, and work has finally begun, spearheaded by a public/private consortium dubbed North Perimeter Contractors LLC. ALL Crane Rental of Georgia, a member of the ALL Family of Companies, was tapped to provide lift equipment for the expansive project.

The cranes will perform the important work of setting girders and beams. This aspect of the job mainly involves nighttime tandem picks, making for a project with a high number of critical lifts.

Many of the steel girders are super-sized, topping out at 180,000 pounds and 180 feet long, or half the length of a football field. Because the interchange is vital to maintaining flow of metro traffic, it is remaining open while the new construction is going on alongside. When it’s time to set the large girders, two all-terrain hydraulic cranes need to be positioned on the live roadway below to reach the new interchange sections being constructed above. Because of the periodic traffic interruptions, necessary for motorist safety, work is relegated to the less-busy overnight hours, roughly between 1:00 a.m. and 6:00 a.m.

Cranes in the 300-ton weight class are typically configured with full counterweights, while the counterweights for the Tadano and Grove are adjusted situationally. The Grove GMK7550 has even been able to handle some smaller 80,000-pound beams on its own with a MegaWingLift™ attachment and 120 feet of luffing jib.

For the tandem picks, one crane is positioned in the median, while the second is placed on the opposite shoulder. The median crane moves first, followed by the shoulder crane. Both conduct a series of precisely coordinated swings to gradually position the beam for the lift. It must be raised 40 feet above the beam seats before coming to rest. The extremely long and heavy beams must be set within a half-inch of the placement target.

ALL’s operators are in constant radio contact throughout the process, with additional spotters from the North Perimeter Contractors’ team strategically positioned throughout the lift zone. “The operators have developed an intuition that allows them to maneuver seamlessly through the lifts,” said Irwin. “I’m really proud of our team.”

The process will be repeated scores of times from now until project completion.

The ALL Family of Companies is the largest privately held crane rental and sales operation in North America. Their strategically located branches have access to one of the world’s largest and most modern fleets, operating under the ALL, ALT, Central, Dawes, and Jeffers names. For a rental quote: 800-232-4100 or www.allcrane.com.