When autocomplete results are available use up and down arrows to review and enter to select.
Back
Published Sep 22, 2021
In Power Generation 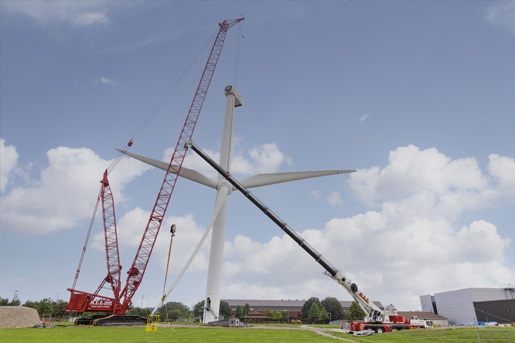 Cleveland-based Lincoln Electric, a manufacturer of welding equipment, made a big splash a decade ago when it constructed a wind turbine on its property and pledged to use the energy derived as 10% of its plant’s total electricity requirement. When the 80-meter, 2.5-megawatt turbine was erected back in 2011, the crane used was supplied by ALL Erection & Crane Rental, a member of the ALL Family of Companies. So, when the time came for scheduled maintenance, ALL was the natural choice to supply cranes yet again.

“This project allowed us to demonstrate our job planning and preparation,” said Chad Rados, project coordinator for ALL. “With the wind turbine team traveling from Germany, we wanted to provide as much local support as possible to make their jobs easier.”

Locally, ALL worked with general contractor Great Lakes Construction. But the team of technicians did indeed travel to Cleveland from Germany, where the headquarters of turbine-maker Kenersys is located.

There were three distinct tasks for cranes to perform: removing the turbine’s hub, lifting men, and removing parts of the drive train.

The German technicians were tasked with replacing parts of the wind turbine’s drive train. To accomplish this, first the turbine’s hub – including all the blades – had to be removed. This required two cranes to perform a dual pick.

Next, a single crane with a man basket carried the crew from Kenersys up to the nacelle, where they climbed inside and began to disassemble the drive train.

“For removing the hub and blades in a single, 145,000-pound piece, the LTM 1230 was rigged to the bottom blade, acting as the tail crane, while the 18000 was rigged to the top of the hub,” said Rados. “As the cranes lifted in tandem, our operators had to shift the hub from a vertical orientation to horizontal so it could be set down.”

The 18000 was configured with 320-feet of main boom plus an additional 25 feet of Extended Upper Boom Point (EUBP) attachment. “The EUBP is also known as the ‘wind tip’ and is an attachment especially built for wind work,” said Rados.

Next it was time to lift the German team to the nacelle so the members could climb inside and begin freeing the drive train parts in need of replacement. Before beginning any disassembly of the drive train, parts to be freed were first rigged to the crane for lifting. Once removed, technicians were then able to easily “hand off” the part to ALL’s crane operator.

Parts were removed and placed on trucks on the ground below, where they were driven to a local

fabricator for remanufacture. Remanufacture was turned around quickly. The maintenance shutdown for the wind turbine was slotted for 14 days and was accomplished with time to spare. 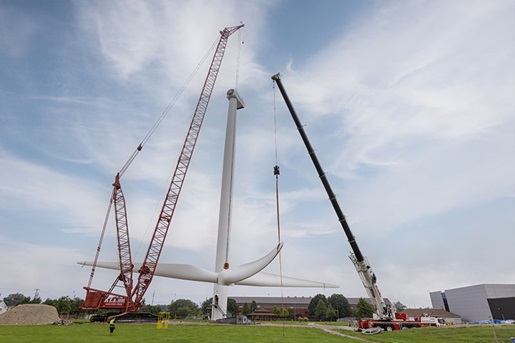 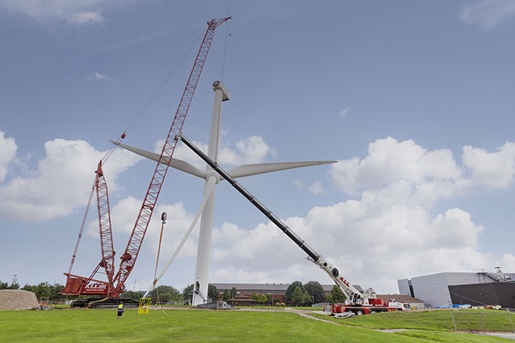 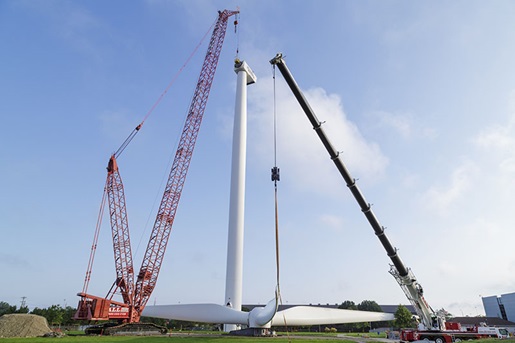 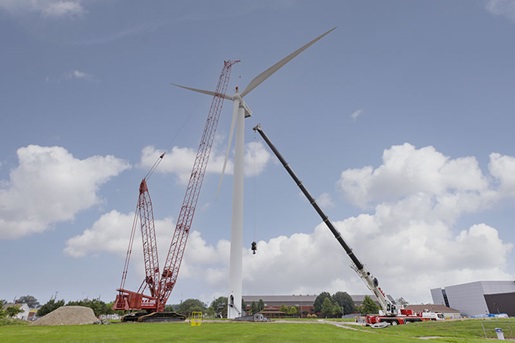