When autocomplete results are available use up and down arrows to review and enter to select.
Back
Published May 15, 2021
In 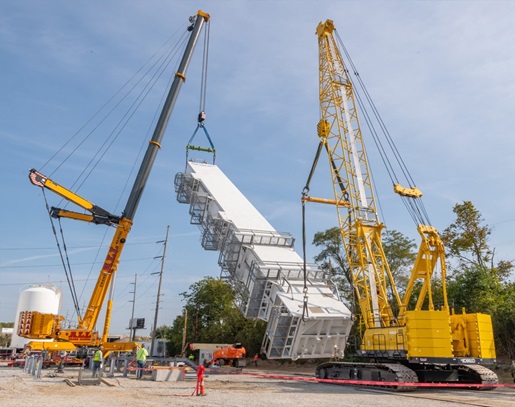 Construction is underway in Indianapolis on a new largescale air separation plant used to manufacture and process medical and industrial gasses.

The project is being done for Messer Americas, the world’s largest privately held industrial gas enterprise and a company with more than 120 years of experience across industrial, medical, electronic, and specialty gases.

Announced pre-pandemic, the project turned out to be timely. It will make life-saving gasses for the medical market in addition to industrial gasses for chemical, food processing, welding, glass production, and metal fabrication.

A vital part of an air separation plant is a cold box, a double-walled pressure vessel that holds gasses or liquids at very low temperature. The fractional distillation used to separate elements of raw liquids and gasses requires temperatures as low as -328° F.The cold box at the Messer site was a major component installed during construction of the plant. It was shipped in one piece from overseas, traveled by barge up the Mississippi River to the Ohio River and then was delivered to the Indianapolis site by truck.

Central Rent-A-Crane, a member of the ALL Family of Companies, provided two cranes to lift and set the cold box, which measured 135' long, 14' x 14' in cross section, and weighed 256,000 lbs. Before being uprighted and set-in place, it lay lengthwise on temporary supports, and needed to be uprighted, set into a base, and then welded in final position.

“The 135' length of the cold box dictated the use of two cranes,” said Tim Welty, sales specialist and estimator with Central Rent-A-Crane. “The larger of the two cranes would hoist the cold box into the air. The smaller crane would tail behind to help tip and position the box upright.”

The larger crane was a Liebherr LTM 1750-9.1 mobile crane, known for its drivability and large, 900-USt maximum capacity, which can be further increased by using its guyed Y-frame, which was employed on this job. The LTM 1750-9.1 was configured with 450,000 lbs. of counterweight, and had its boom telescoped to 170' and angled for a 40' lifting radius.

The tailing crane was a 160-USt Kobelco CK1600G-2 lattice-boom crawler crane rigged with 90' feet of boom angled for a 25' lifting radius.

Due to the weights involved in the lift, the Central team paid close attention to ground bearing pressure. To help distribute the total load weight, the ground prep team built a temporary road capped with steel plates so the Kobelco’s tracks had something solid on which to crawl. Wooden mats, measuring 4'x 20' and made of solid oak, provided additional support.

Once the cold box was suspended and upright, the Kobelco was disconnected and the LTM 1750 swung the box to the right and set it on the base. The LTM 1750 continued to hold the cold box in place for eight hours while ironworkers welded it into place.

After this lift, the LTM 1750 remained on the site for three more weeks, assisting with other aspects of plant construction. Central Rent-A-Crane is also providing assorted rough terrain cranes for the job, which remain on site.

Construction on the $38 million plant is expected to complete by next spring. 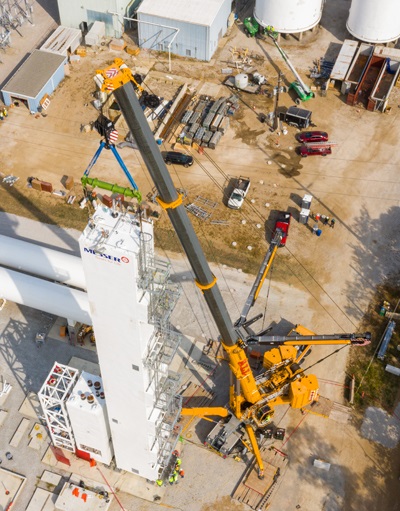