When autocomplete results are available use up and down arrows to review and enter to select.
Back
Published Jul 20, 2022
In 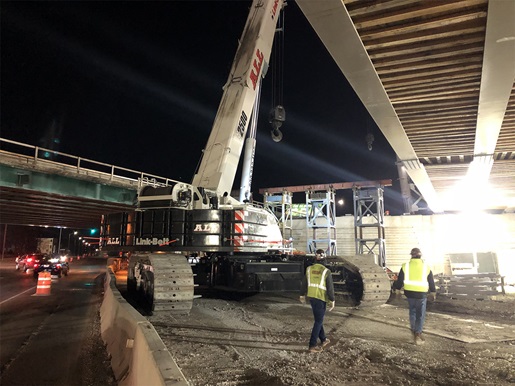 Beam replacement for bridge projects happens every day across the U.S. It’s a routine part of infrastructure improvement, happening just about as regularly as delivering the mail. The mail analogy rang especially true during a recent Chicago-area project for the Illinois Tollway, in which two crane booms needed to perform their work through a mail-slot-like opening between northbound and southbound lanes of the Tri-State Tollway (I-294) over Roberts Road and 87th Street that grew narrower as each beam was placed. The space measured roughly nine feet at the beginning but closed to less than half that by the end.

Central Contractors Service, a member of the ALL Family of Companies, is the Midwest’s premier provider of heavy lift equipment, working on thousands of projects in its history, and even its seasoned team was impressed by the narrow gap. “This is the tightest project we’ve ever had for setting beams,” said Paul Urbanski, sales manager for Central Contractors Service.

What lift equipment do you use for such a challenge? The winning tools were two Link-Belt TCC-2500 hydraulic crawler cranes, each with 250-ton capacity. These are cranes made with ease of operation and versatility in mind. Just getting to the jobsite demonstrated some of this versatility.

Each was assembled on a closed roadway in clear areas away from the overhead bridge structures, then tracked and staged under the new or existing bridges. “The luxury of the TCC-2500 is that, once fully built, you can boom the main boom down and travel flat to get under existing bridges,” said Urbanski. The clearance height was just 15 feet, and the cranes fold down to just over 13 feet, leaving plenty of room.

During scheduled nighttime erection work to I-294, the cranes moved out from their stowed locations and set up over hoisting points. The beams were hoisted from the closed lanes of I-294. Tracking with the load, the TCC-2500 crane tracked back under the existing bridge. “At the girder’s final setting location, the crane’s main boom was just a foot and a half from the edge of the erected girder and its backside hoist cable was 10 inches from the existing bridge, as calculated in the planning process,” said Dave Budzius of Metropolitan Steel, the steel erector for the job and Central’s customer.

In essence, high-angled booms from the TCC-2500s, measuring 133 feet long, rose through the mail slot and above closed lanes of the bridge above, where flatbeds sat with the steel beams. The cranes dual picked each beam and lowered it into position. Some swing was involved, but it was tightly calibrated, given the limited space through which the booms were reaching. Once positioned, the cranes held the beams in place while they were permanently secured.

Urbanski and Budzius both say much preliminary work went into assuring a successful series of lifts, consisting of site surveys, measurements, multiple checks and verifications, and formulation of both 2-D and 3-D lift plans. Site coordination meetings were performed with the assistance of project general contractor F.H. Paschen, Central leadership and crane operators, Metropolitan Steel, and the steel fabricator’s shipping department.

“With jobs like these, you’re often setting up 500- to 600-ton cranes, but we found we could get in with these TCC-2500s and work well within the limited space,” said Urbanski. “They’re so flexible because they move well within tight confines.” 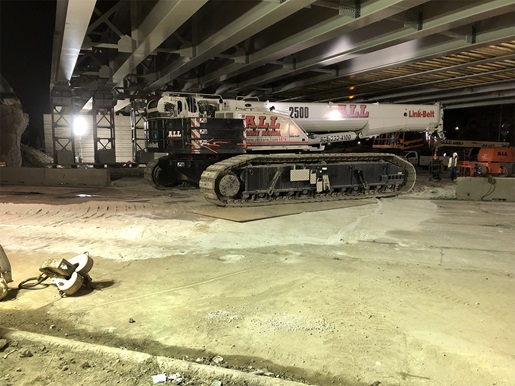