When autocomplete results are available use up and down arrows to review and enter to select.
Back
Published Mar 11, 2022
In

Rocking on the River 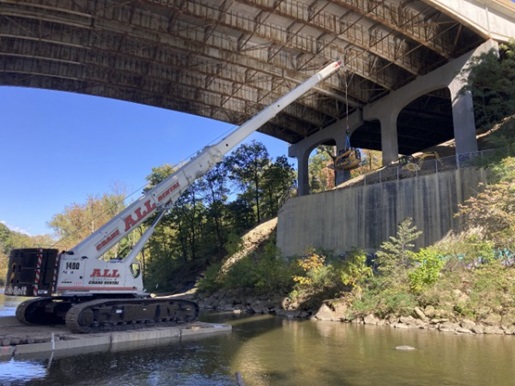 How do you do the impossible? What if you’re supposed to deliver 2,000 tons of rock to a place where it simply can’t be done?

That was the challenge confronting the team working on a recent project in the Rocky River Reservation, part of Cleveland Metroparks. Two bridges that pass over the reservation, one for Interstate 90, the other for Lorain Avenue, were in need of the rocks to slow erosion. But so many obstacles stood in the way, no one wanted to bid on the project.

For starters, the east side of both bridges was completely inaccessible by traditional excavators, track loaders, or other equipment. No one could figure out how to even begin the work of spreading rock.

General contractor Shelly and Sands accepted the challenge. Their plan was to place a crane down below in the river bed and use it – somehow – to both deliver loads of rock and to lift and set the excavators and skid steer needed to distribute it.

Then came the next set of challenges. A large crane could not be used because it couldn’t traverse the steep grade down to the river bed. Any crane used couldn’t stop the river’s flow, either, therefore the crane would have to be removed from the river bed every night.

Also, the Ohio Department of Transportation’s easement for the park land was in a specific area, which had to be adhered to. And it was more than 100 feet away from the target area for depositing the rock.

Shelly and Sands sought the crane specialists at ALL Erection & Crane Rental, a member of the ALL Family Companies, to help them choose the right machine based on the demands of the project. ALL needed to provide a crane that had the ability to: Make the 105-foot reach; Handle the necessary capacity; and boom out from under the bridge while carrying the necessary weight. It also needed a small enough footprint to not block river flow and had to be mobile enough to drive down to the river bed every morning and drive back up to a lay-down area every night.

Brian Meek, sales rep for ALL, says finding the right crane began by first reviewing spec sheets for a number of cranes in ALL’s fleet to see which ones fit the criteria. “Once we narrowed it down to several good candidates, we plugged them into our lift software to see how each would react in project conditions,” said Meek.

Its 195-foot boom provided plenty of reach, it was small and nimble enough to make the daily trek up and down a steep slope, and its chart could handle lifting rock from more than 100 feet out.

Resting atop a specially constructed temporary causeway in the river, made by Shelly and Sands, first the TCC-1400 was used to pick and set two excavators and a skid steer on the east side of the bridge. Then it began the core task of moving 2,000 tons of rock.

The crane carried it over 5 tons at a time.

A track loader doled out the 5 tons of rock into a skip box. ALL’s crane operator would swing over and connect to the skip box, hoist and swing then scope the load under the bridge, finally setting the skip box down in a dump zone on the east side. From there, the excavators and skid steer awaited to distribute the rock.

The maneuver was performed 400 times until all 2,000 tons had made the short yet complicated trip to the other side.

“It’s always a pleasure working with Shelly and Sands,” said Meek. “They have a can-do attitude and the creative minds needed to come up with novel solutions. Where others looked at this job and said impossible, they asked ‘How can we get it done.’ We’re glad to have been a part of solving the problem.” 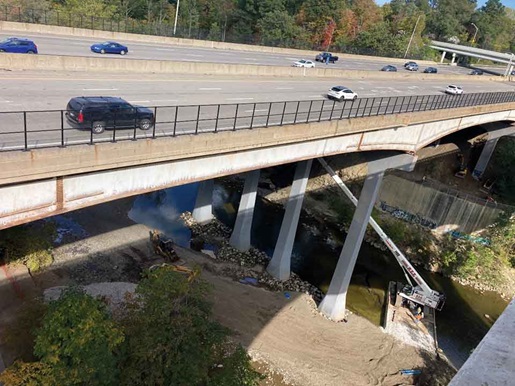