When autocomplete results are available use up and down arrows to review and enter to select.
Back
Published Nov 4, 2020
In Roads and Bridges 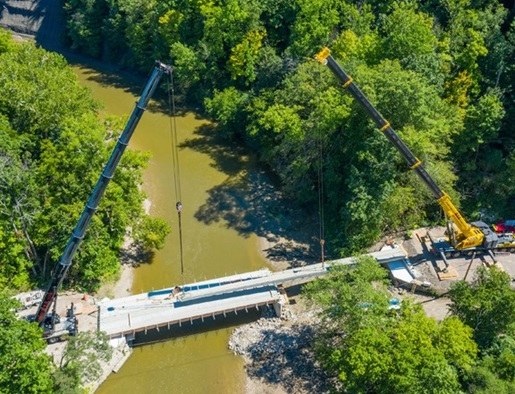 To perfectly execute a crane lift, planning begins long before the rigging is ever connected to the workpiece. A recent bridge project in Waite Hill, Ohio, east of Cleveland, amply demonstrated this reality.

The bridge was to span the Chagrin River in a valley between two hills, surrounded by dense forest and utility poles. ALL Erection & Crane Rental of Cleveland, a member of the ALL Family of Companies, was to provide two cranes to set box beams for the bridge. The site posed three distinct challenges in the form of limited access to the site, soft ground, and a tight or obstructed workspace. ALL had the knowledge base to determine the best course of action, the broad fleet from which to draw the proper machines needed, and the experienced operators to execute the plan.

There was just enough room on either side of the river to position the two cranes, but not much room for anything else. This meant no laydown area for crane assembly, so each piece would need to be trucked down the hill one at a time as the cranes were put together.

Being so close to the riverbank, the earth was soft, requiring special consideration for ground bearing pressure. Several tons of stone were trucked in to strengthen the ground capacity and more evenly spread the load.

The close quarters created by the trees and utility poles further limited maneuverability on the jobsite.

Mike LiPuma, sales and rental manager for ALL Crane, was in charge of the job and sought counsel from two of his cohorts, project manager Chad Rados and sales rep Brian Meek. Together, the three men have more than 75 years of crane experience.

Because of the site’s space and access limitations, the box beams—ranging in size from 85 feet long and 86,000 pounds to 100 feet long and 100,000 pounds—could only be trucked to the north side of the river. The LTM 1450 picked and set the first group of 100-foot beams, placing them on the north side abutment and a pier in the Chagrin River.

“We chose the LTM 1450 because of its VarioBallast® system, which reduces the ballast radius by allowing the counterweights to ‘suck in’ as the boom is swinging,” said LiPuma. “With the nearby trees and utility poles, this capability was vital to allow us to pick and set the beams in close proximity to the obstructions.”

After all the 100-foot beams were set, the 85-foot beams needed to be set on the south side abutment and the pier. Because the beams could only be trucked into the north side, the LTM 1450 had to pick the 85-footers and hand them off to the GMK7550, on the south bank, for final placement. “The 1450 would set a beam on the pier and cantilever out far enough to where the 7550 could grab it,” said LiPuma.

“This job took a lot of planning,” said LiPuma. “But when our operators arrived at the site and gave everything a thumbs-up, I knew they were at ease and we’d created a safe, effective lift plan.”