When autocomplete results are available use up and down arrows to review and enter to select.
Back
Published Feb 9, 2022
In Unique Picks 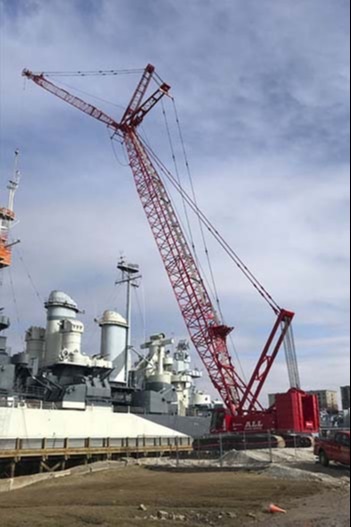 Recent hurricanes have damaged three masts on the ship, and repair work is underway. The ship’s custodians called on ALL Carolina Crane Rental of Wilmington, a member of the ALL Family of Companies, to provide the necessary lift equipment to safely remove the masts for repair then replace them upon completion.

ALL provided a Manitowoc 999 Series 3 lattice crawler crane for the work. Its 275-ton capacity makes easy work of the masts, which range in weight from 9,000 pounds to 18,000 pounds.

“The Triple 9 is a stout crane with a strong chart that’s quick to build,” said Chase Parker, dispatcher for ALL Carolina Crane Rental of Wilmington. “It offers the footprint the customer was looking for and will perform well for them.”

The crane is configured with 140 feet of main boom and 120 feet of luffing jib. The crane was delivered to the site in 14 truckloads. A 110-USt Liebherr LTM 1090-4.2, also provided by ALL, acted as an assist crane. The 999 was constructed in just a day and a half, even in the tight confines of a parking lot.

The Manitowoc 999, delivered in late January, will be on site for three months to facilitate removal and replacement of the masts. Due to the fluctuating ground conditions, specially constructed ground mats were used to raise the crane three feet off the ground — a factor that helped motivate a decision to leave the crane in place for the duration of repairs rather than bring it back later to replace the finished masts. As a result, the imposing crane will become a familiar part of the downtown skyline for a quarter of a year.

The team across the three Carolina branches (Raleigh and Wilmington, N.C. and North Charleston, S.C.) is accustomed to high-profile work. They regularly assist the U.S. military at nearby Army and Marine Corps bases, building barracks and handling any lifting needed. This caliber of work brings an extra measure of pride to the staff at the three Carolina branches and helps drive them to always be on their game.

The three Carolina branches work together to form a regional crane powerhouse. From its central-state positioning, ALL’s Raleigh branch can serve both of the Carolinas and Virginia. It acts as a funnel for equipment coming from ALL’s Northern yards into the broader Carolina region. All three Carolina branches share logistics systems, and equipment moves freely around the region, including