When autocomplete results are available use up and down arrows to review and enter to select.
Back
Published Oct 14, 2020
In Roads and Bridges 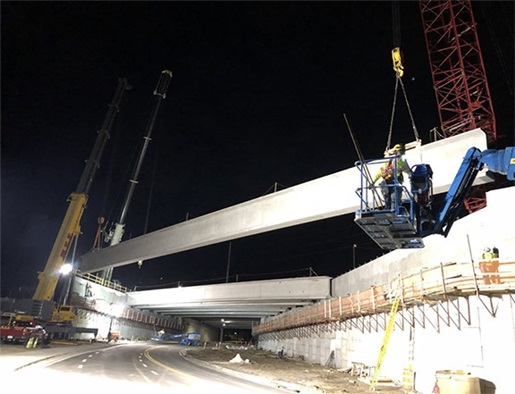 Work continues on the $2.3 billion reimagining of Interstate 4 in and around Orlando. The highway reconstruction project, begun in 2015, has entered Area 4, a six-mile stretch through the Altamonte Springs suburb north of the city. Recent work in this zone involved a series of night picks to set girders for a new bridge over Wymore Road.

ALL Sunshine Crane Rental, a member of the ALL Family of Companies, provided a 550-USt Grove GMK7550 for the work of setting precast girders. The GMK7550 was positioned on the ground below the bridge pedestals. Two other cranes, a 230-USt Manitowoc 888 and an 800-USt Demag AC700-9, were  positioned up top, level with the interstate. Because these two machines were unable to complete the lifts on their own, the GMK7550 assisted with completion.

“After picking his end of the girder from the transport trailer stationed on the closed westbound lanes of I-4, the operator of the Triple 8 had to walk with it,” said Steve Johnson, sales representative from ALL Sunshine Crane Rental. “Because the DemagAC700-9, with its outriggers deployed, had to remain stationary, when the Demag’s maximum radius was reached, that’s when the GMK7550 took over for the Demag and finished setting the girder.”

Here’s how it worked.

The girders, ranging in length from 122 to 187 feet long, were trucked in via I-4 westbound. They were to be set on pedestals already constructed adjacent to the roadway.

Meanwhile, the GMK7550, on the underpass below, was positioned to the right of the AC700-9. Once the AC700-9 reached the limit of its radius, the operator set its end down on the north cap and the GMK7550 operator picked it up. Now, with the GMK7550 in possession of that end of the girder, the Manitowoc 888 continued to walk closer. The GMK7550 and the 888 then finished setting the girder into place.

It’s a process that was repeated six times over the course of two nights.

ALL Sunshine Crane Rental has provided numerous cranes throughout the I-4 project, which began five years ago with the ultimate goal of reducing congestion and improving travel through a region bustling with theme parks and entertainment venues, as well as neighborhoods and a thriving downtown.

“We’ve had relationships with the parties involved for many years,” said Johnson. “We’re always pleased to provide critical assist to our customers when they need us.”