When autocomplete results are available use up and down arrows to review and enter to select.
Back
Published Jun 3, 2022
In Roads and Bridges 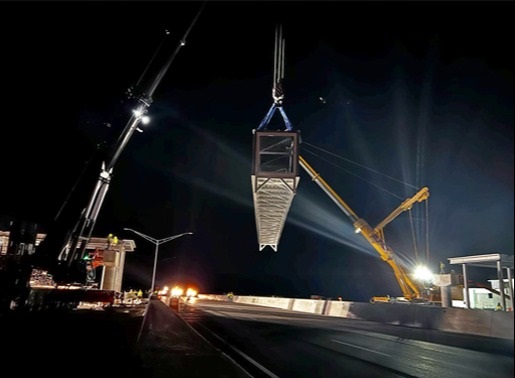 A dual-crane night pick in the close confines of an off-ramp project called for two heavyweight cranes and an experienced crew. The seasoned team at Jeffers Crane Service, a member of the ALL Family of Companies, and two Liebherr all-terrain (AT) cranes showed their stuff during the job on the Ohio Turnpike. Jeffers provided a 550-USt Liebherr LTM 1450-8.1 and a 600-USt Liebherr LTM 1500-8.1 to pick and a set a pedestrian bridge over a stretch of roadway located in Edon near the Indiana border.

The bridge is being added with construction of a new mainline toll plaza at exit 4. It’s part of the Ohio Turnpike’s new Toll Collection System (TCS), which will modernize the turnpike experience by adding open road tolling. This will add express exit lanes for motorists that use the E-ZPass prepaid toll device.

You might not think a turnpike needs a bridge for pedestrians, but this bridge has a specific, necessary purpose. It will be used by turnpike employees to access toll booths on the other side of the reconfigured off-ramp.

The bridge arrived in multiple pieces and was assembled on-site into three main sections. Plans called for the two ATs to first set the center section as a single large piece on the bridge’s support structure. The completed center section was 137 feet long and weighed 160,000 pounds.

The Y-frame used on the LTM 1500 delivers an enormous increase in lifting capacity, particularly on long boom systems since the guiding system significantly improves lateral stability. The configuration ultimately assures some cost savings. Typically, there’s an additional charge for using the attachment and the assembly cost will increase, but, overall, outfitting a crane with a Y-guide is less expensive than delivering a larger crane.

“The Y-frame allowed us the required increase in capacity while still utilizing a relatively smaller crane and its smaller footprint,” said Tony Serres, project foreman for Jeffers. “This was critical given the amount of space we had to work with on site. A larger crane just wouldn’t do.”

Even with the smaller confines of a turnpike construction site, the Jeffers team executed assembly of these larger cranes flawlessly. “When we did the boom launch for the 1500, we had about 100 yards to work with,” said Serres. “It’s not a lot of room, but we made it work.”

The lift was performed at night to limit the impact on traffic flow. Jeffers’ crane operators had three 20-minute rolling roadblocks in which to accomplish the task, and completed the pick and set ahead of schedule.

The next day, the same cranes were used to set the two end sections of the pedestrian bridge. Total length is 318 feet.

“The strength and reach of these Liebherrs made for smooth lifts,” said Serres. “The bridge will give toll workers free passage to either side of the exit without ever getting into close proximity with vehicle traffic.”