When autocomplete results are available use up and down arrows to review and enter to select.
Back
Published Jun 15, 2022
In Commercial Construction Unique Picks 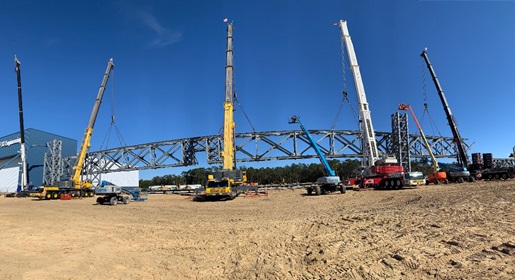 Four southern branches of the ALL Family of Companies banded together to accomplish a massive lift for construction of a new hangar at an international airport in northern Florida.

Steel box beams formed large trusses, the heaviest of which weighed in at 610,000 pounds. This truss, which measured 20 feet high and 400 feet long, needed to be lifted and set as a single piece. And, by the way, the massive framework would need to be raised to a height of 80 feet.

In this case, a journey of 80 feet began with one phone call … then a second and a third.

ALL Crane Rental of Alabama, a member of the ALL Family of Companies, was awarded the contract to provide lift equipment. Due to the weight and length of the truss, four heavyweight all terrain (AT) cranes, all with capacities of 550 tons and above, were needed to execute the lift, each rigged to the truss at the same time and lifting in perfect unison. The Alabama branch sourced the cranes from three of its sister yards from the ALL national footprint in three other southern states: ALL Crane Rental of Florida, located in Tampa; All Crane Rental of Georgia, located in Austell; and ALL Crane Rental of Louisiana, located in Geismar.

Scott Swearengin, sales representative from ALL Crane Rental of Alabama, acted as point man for the project and also programmed the 3-D lift plan for the four cranes. Although executing the lift took just one hour, planning began a full six months prior.

“To reserve four large cranes like that, we needed to get on the radar of our sister branches as early as possible,” said Swearengin. “On Florida’s Gulf Coast, weather can always become an issue, so scheduling a job is even more sensitive. You’ve got to be able to turn on a dime.”

The 3-D lift planning took time as well, as Swearengin first had to program each crane individually then bring all four together. Any adjustment in the overall plan required an update to the computer, so the 3-D plan was revisited multiple times in the months and weeks leading up to lift day.

ALL has its own trucking division, so delivering the four massive cranes to the airport from three separate yards across three different states did not present the scheduling issues that might have arisen from using third-party trucking. “In all, 40 truckloads descended on the job site from the three sister branches,” said Swearengin. “We started assembly roughly five days before the lift so everything would be ready.”

On lift day, Swearengin’s team was in constant radio contact with crane operators conducting the 610,000-pound quad lift. Each operator reported his crane’s load, with instructions relayed back from the team on whether to speed or slow its individual portion of the lift. “Executing a lift like this is all about the skill of the operators,” said Swearengin.

Once lifted into position, the four cranes held the truss aloft as thousands of bolts were installed to secure it.

The four-crane package was needed only to lift this particular truss. The two GMK7550 ATs remained on site for several days after to execute dual picks for the remaining steel needed to frame the hangar. 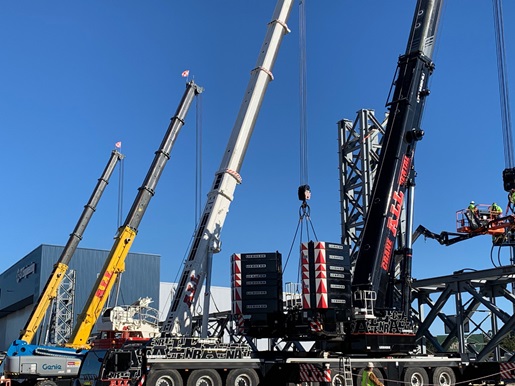