When autocomplete results are available use up and down arrows to review and enter to select.
Back
Published Oct 21, 2022
In Unique Picks 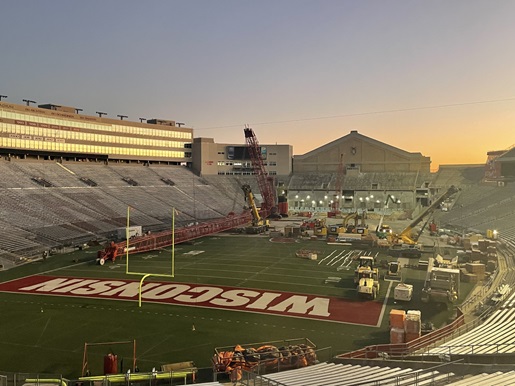 Camp Randall Stadium, home of the University of Wisconsin Badgers, is the latest sports stadium getting an upgrade to seating and amenities. The $77.6 million dollar renovation to the south end zone will see the removal of 6,000 bleacher seats to make way for 2,300 enhanced premium seating options, access to indoor and outdoor hospitality clubs, expanded premium food and beverage offerings, and dedicated restrooms.

General contractor JP Cullen secured a Manitowoc MLC300 to serve as its “center stage lift equipment” for construction of the new addition. The crane provider was Dawes Rigging & Crane Rental, a member of the ALL Family of Companies.

“Cullen was on a tight schedule, having to complete the renovation in the football off-season,” said Ryan Harrison, general manager of Dawes Rigging & Crane Rental – Madison. “The MLC300 offers the capacity and the reach needed to get the work done efficiently.”

The MLC300 has a 325-ton capacity and was configured with VPC-Max for exceptional capacities, even at extended boom points. This feature saved the crew a lot of time – meaning it saved money, too. “We were able to mostly keep the crane in a fixed position,” said Tony Rothschadl, operations manager for JP Cullen. “Its reach and power enabled us to avoid the downtime associated with repositioning. We did build 80 feet of runway for moving forward and back during deconstruction, but we kept the crane in the same position about 85 percent of the time with 250 feet of main boom, which is impressive.”

A special ramp was built to get the MLC300 onto the field, as the existing access ramp for utility and emergency vehicles was too short and steep.

The new portion of the stadium is a hybrid structure made of structural steel, precast stadia panels, and wall panels. “This project employed just about every type of construction material you could think of,” said Rothschadl. His team used Building Information Modeling (BIM) to plan how the different material needed to come together to successfully construct the new end zone amenities.

Before construction could begin, Cullen had to first deconstruct roughly two-thirds of the existing south end zone. Material pulled from this phase was crushed on-site and used in construction of the crane pad, extended access ramp, and as backfill where needed.

The south end of the stadium is close to the university’s Field House, a historical structure built in 1930. The crane from Dawes gave Cullen the reach and capacity it needed to execute major lifts without ever exceeding 75 percent of the MLC300’s capacity, helping to ensure the safety of the nearby historical building. “Our heaviest lifts were 55,000 pounds at 207 feet,” said Rothschadl.

The Badgers football team was still practicing for its post-season bowl game when work began, so half the field had to remain free of equipment for team practices. “For about a month, it was a case of, ‘when you’re done with kicking practice, we’ll get to work,’” said Rothschadl.